I haven't posted on this blog in a long time.  This past Summer has been a difficult one.  I started on a new treatment (Rubraca) which has really been kicking the stuffing out of me.  I had pneumonia in June, then pneumonitis, then became very anemic from the medication.  It took until September before I started feeling like myself again.

So I just had no energy to do anything with this blog.  Most of the time I don't think anyone reads it, and I'm just talking to myself.

I was in the hospital earlier this month after one of those "worst headache of your life" episodes. I still haven't come up with a word to describe the level of pain I had. I wound up going somewhere locally because the people at FCCC were concerned about the risk of a CVA.  After having some studies, they didn't really find anything wrong, so I just spent the night and then went home later in the day the next day.

The Rubraca had been on hold because my platelets had dropped, but they're back up again, so I'll be restarting it again on Monday.

Not much else going on.  I almost hate to say that.  It's like when I was working in the ED: one never used the "q" word. (e.g. "It's been a quiet night.")  Saying that was an invitation for total chaos. 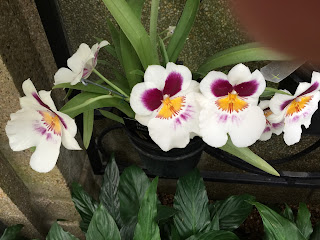 Some color for a dreary day.

PS: Bonus points to the reader who gets the connection to the title of this blog and me.
Posted by Reese, RN at 4:58 PM