I have to be up at the crack of dawn tomorrow because I have an appointment with my gynecology oncologist.  There's no reason I should be stressed about this: I've been feeling well for the most part. It's just that fear of the unknown, the "what if" that starts to gnaw at my stomach.  My chest starts to feel tight, and before you know it, my alarm goes off, waking me up to Warren Zevon howling "Werewolves of London," just as I'd drifted off.  If that doesn't wake you up, nothing will.  Meanwhile, I've spent the night chasing sleep like a mother trying to catch her rebellious toddler.

Like I said, I've been feeling good for the most part.  I have been struggling with the proverbial pain that I have, but that's nothing new.  Last weekend was pretty rough though.  I had severe pain in my side, and then I got a full-blown migraine just for fun.  It's not often that my problems bring me to tears, but in the middle of the night Saturday, I just started weeping over the pain, the loss of mobility, how this disease has changed my life and my parents' lives, and another issue I'll get to.  I don't mean I was crying; I was weeping.  There's a difference, at least from a literary perspective.

The other issue is that I'm having problems with forgetting words, or how to express myself.  The other week I was writing something and had to use the word "cup."  I couldn't remember how to spell it.  I sat there in an internal panic for what seemed like an eternity; I was just at the point of getting up and asking my mother how to spell it when it came back to me.

I could chalk this up to just chemo-brain, but it's been happening a lot more frequently, and now it's becoming something different.  Yesterday I was typing something and suddenly, "poof," I couldn't figure out how to get the thought that was in my head into my fingers.  It again included a problem spelling a simple word--"who."  This time it took about two minutes until my neurons were firing on all cylinders.  It's hard to explain: It's like having a mist suddenly descend in your mind, clouding all your thoughts.  Then, just that quickly, it's gone.

I'm debating telling my physician tomorrow, but I'm afraid she'll either just think I'm neurotic (a possibility) or, this being an academic center, she'll take me so seriously that I'll be in for lots of tests that require myriads on myriads of tests. 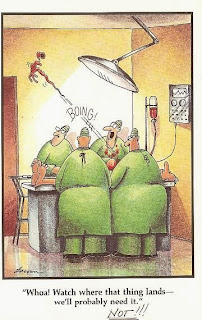 Well, it's been quite a while since I posted here.  Summer came and went, and Autumn is here.

Later this month I go for my q 3 month eval. with the gyn. oncologist in Philly.  I don't anticipate any problems since I've been feeling OK.

I had an issue earlier this year which had me concerned.  Since I have the BRCA2 mutation, I'm at a higher risk for breast cancer.  Well, long story short, I wound up needing to go see a breast surgeon.  Things are OK, but he wants to see me back in January.  He asked me if I'd thought about prophylactic bilateral mastectomy due to my risk factors.  I told him I had, but I kept breaking bones and needing orthopedic surgery.  It's something I'm thinking about; I really don't want to have to deal with another cancer.

It was nice to have a few months of peace and calm.